Let's start with Elena... I know there is a lot of play time, both indoors and outdoors. They have a morning recess, an afternoon recess, and a recess after their time in the cantine from 12:30-1:30. The students also do choral singing each Thursday afternoon (where I was in charge of teaching 70 students the wheels on the bus last week!), and they go to a bigger room for ball games a few times a week.
Because her class includes la petite section (3 year olds) and la grande section (5 & turning 6 year olds), there is quite a variety of learners in the class. I have been lucky enough to spend Friday afternoons in her class teaching English and have been able to get to know the students a bit better. They love telling me their stories in french and trying out their new english words.

There is one teacher in the class and two EAs that come and go between this class and the two other classes at the kindergarten school (maternelle). There are 24 students in the class... 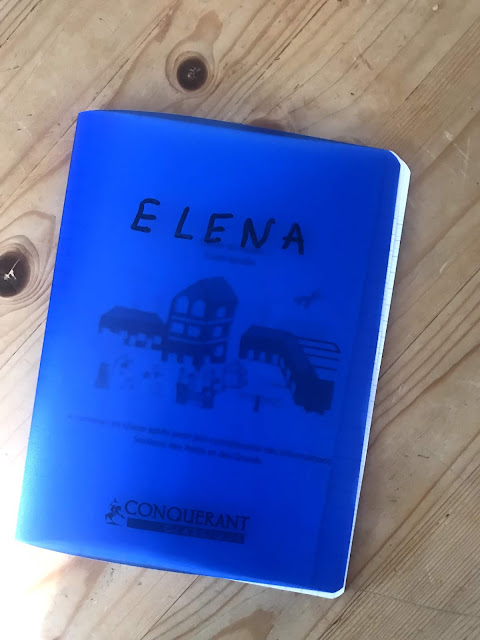 Communication booklet where notices are glued in for parents to see. Sometimes the notices require a signature. 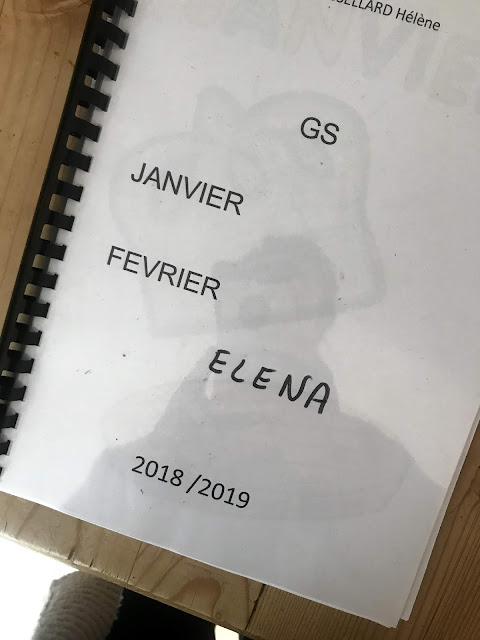 At the end of each term the teachers send home all of the students work in this binded book. It included some assessments, work she had done, and some photos of events that had happened. 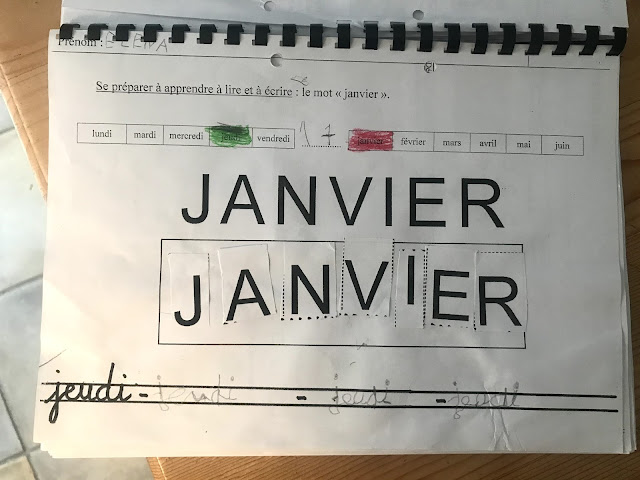 Fitting in a little cursive practice 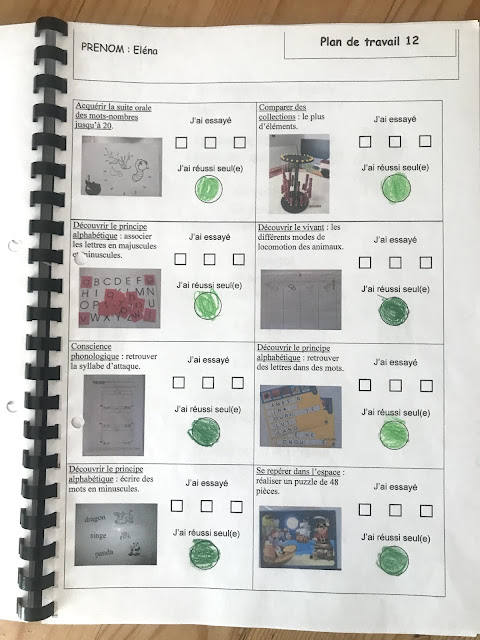 Here is what one of her assessment pages looks like. They use coloured dots for grading students at this age as well as the boys' ages. Green means things are going well :) 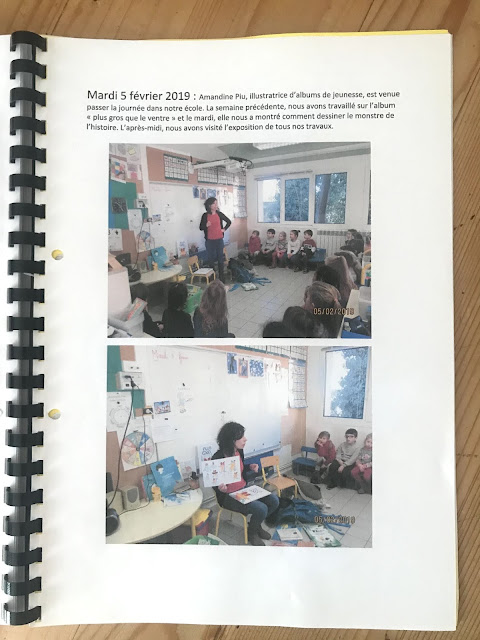 Some photos from when a well known illustrator visited the school for the day. The students heard her stories, worked on several projects together, and then had a parent viewing opportunity at the end. 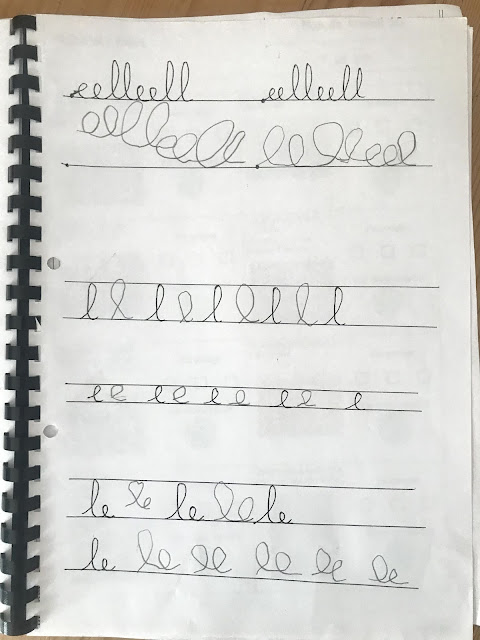 Learning how to handwrite the l and e in her name :)

Here we are in CE1. Hudson is in a straight CE1 class, or as we know it, grade 2. He has a maître (male teacher), not a maitresse and they call him maître.  He is a sweet man that cares a lot about the students and jokes around a lot (like a certain previous grade 2 French teacher in Victoria :-p) but there are also some interesting consequences such as doing conjugations of verbs and standing with your nose in the corner.  Hudson has not told us that he has had his nose in the corner yet.. but how would I know?  :-p

Today I had the pleasure of spending the day with Hudson's class at an all day sports event where the students participated in 9 different sporting events such as throwing, running and hopping.  It was so great to get a better feel for the vibe of his classmate and their interactions with their teacher. I am totally assured now that when he is at school, he is surrounded by lovely children and a great teacher.
There are 18 students in the class. 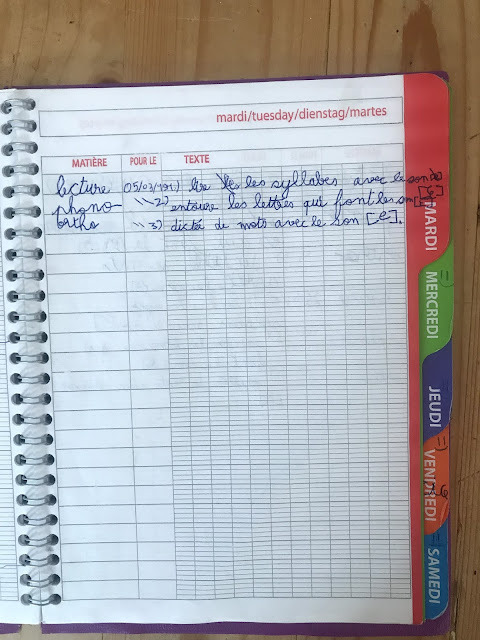 His agenda. He does it all in handwriting.. sometimes neither of us can read it and don't know what is due, but this is becoming a thing of the past because he is improving rapidly. 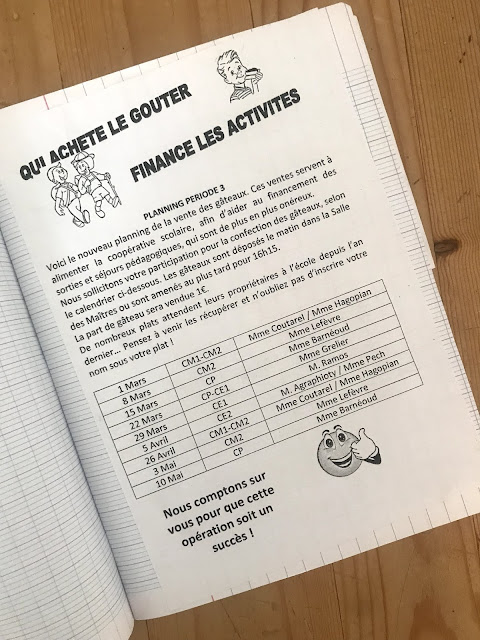 This is his book where notices are placed. No email here people! This is old school :) I actually really enjoy it. It has forced me to speak with so many people in person as opposed to sending messages.  This particular notice is for a Friday baking day. Each Friday a different class brings in baking to be sold at the gates of the school at 4:30 on Friday. I have already had two days and will have two more :) Good thing I have some extra time on my hands. 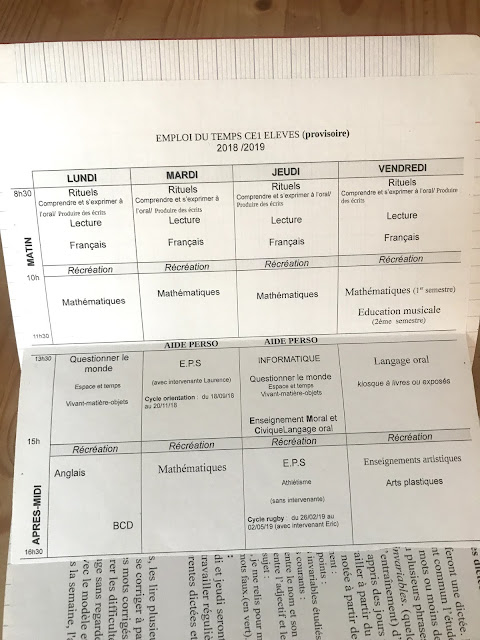 Here you can see his weekly schedule. He is absolutely loving the math, the anglais is pretty funny, and they have started doing rugby with a coach at the stade (field for sports about 200 metres from the school that they walk to) once a week. 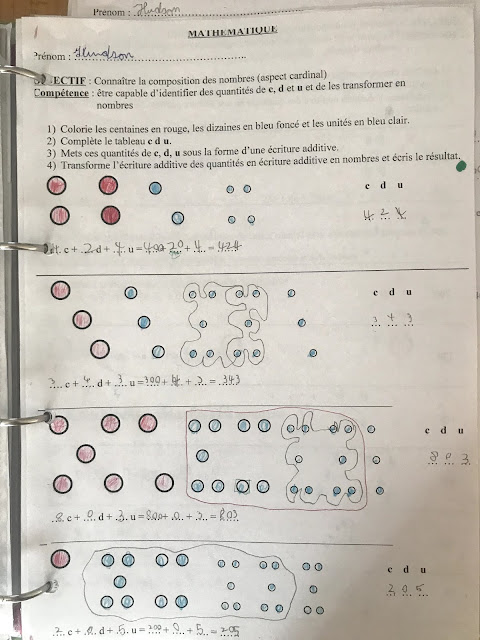 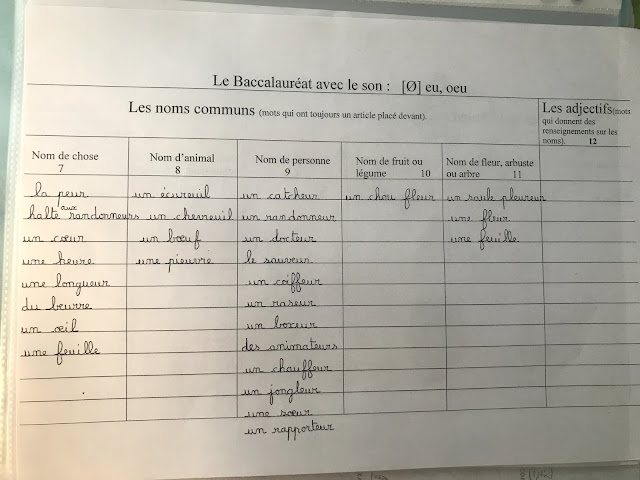 Every week they work on a new sound and together they fill out as much as they can as a class. Then the teacher photocopies it and they do certain activities with it for homework. I love that the students have a connection to these words and often include names of roads, towns, stores, and kids names from the village. 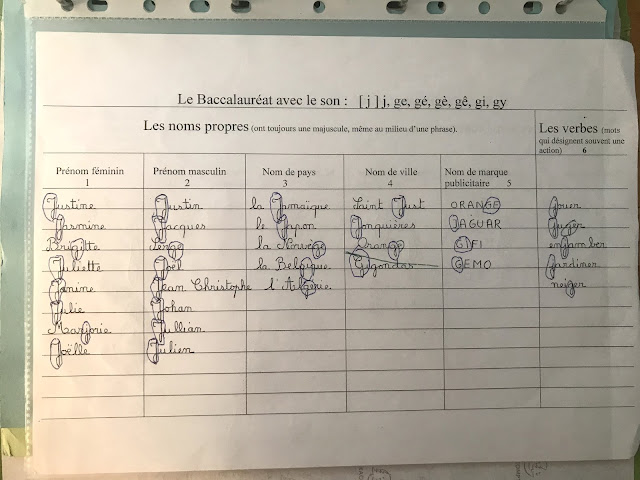 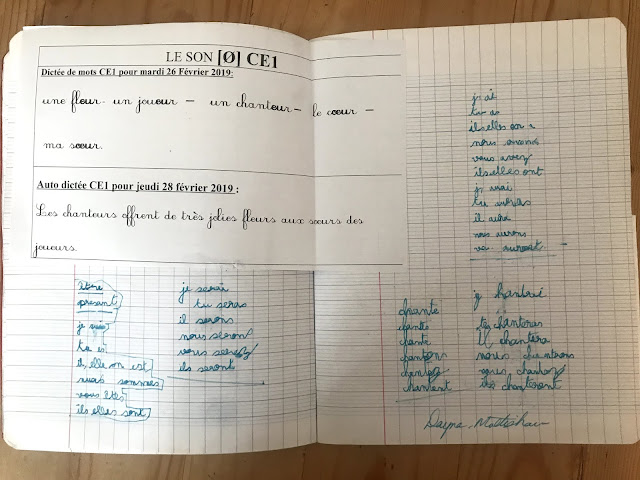 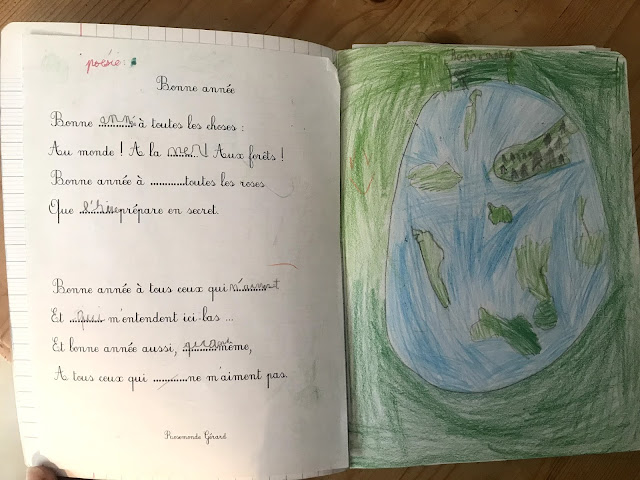 An example of a poem that needed to be memorized a few weeks ago. Yeesh.. this kid can memorize things so easily!

Mr. Landon is in a CM1/CM2 split class with the majority being CM1.  I do not have a printout of his schedule here to share but I believe it is similar to Hudson. He also has music class each week, and goes to the stade (field) for physical exercise. They have just started a new thing where the two older classes in the school are brought to the stade for their lunch recreation period, yay for playing on grass!

We are so glad that we are here for this period of the year because they have begun a biking program in the school! Every Friday afternoon they have teachers and volunteers from the local mountain bike club (the one the boys are part of) come and work on biking skills and safety with the students. In June they will bike for 5 days straight and camp overnight each night, with some days up to 40km of biking. I hope both Jeff and I to be able to join the class during the days and return home at the end of the day to pick the other two up from school. 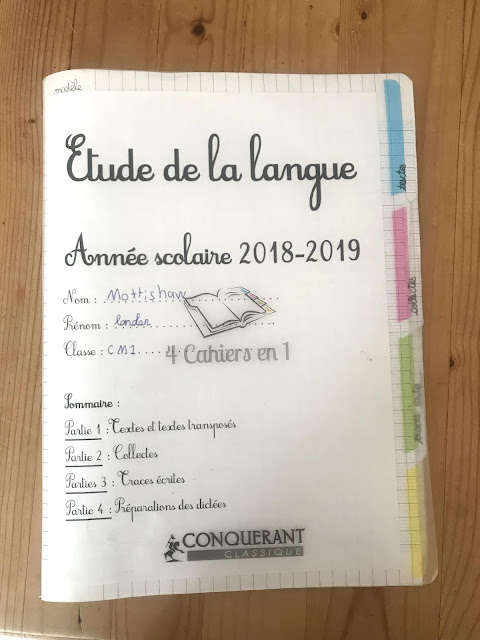 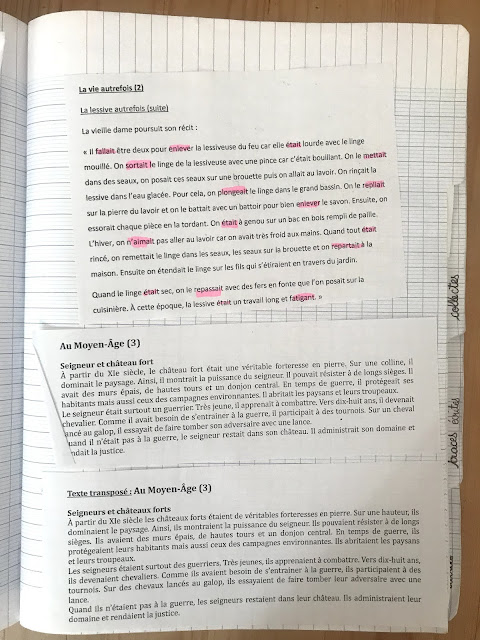 Language study :) The new vocabulary needed to understand some of these texts is overwhelming! 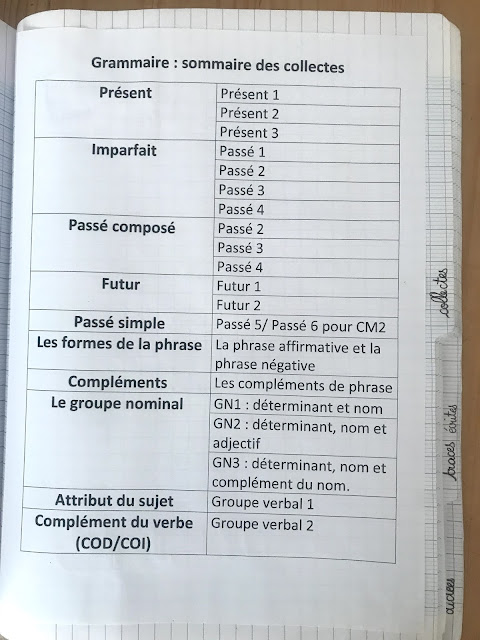 A little list of what will be covered between January and June :-p 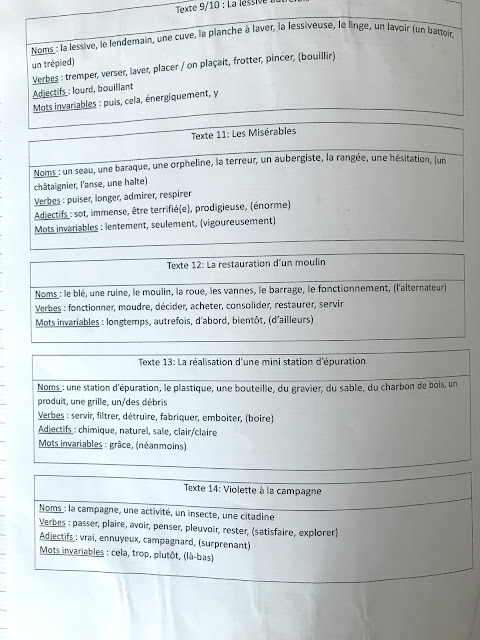 Each rectangle is a different week's spelling test. If they are in brackets then they are just for the kids in CM2 (Grade 5). Usually there are 16-20 words to memorize for the test at the end of the week. 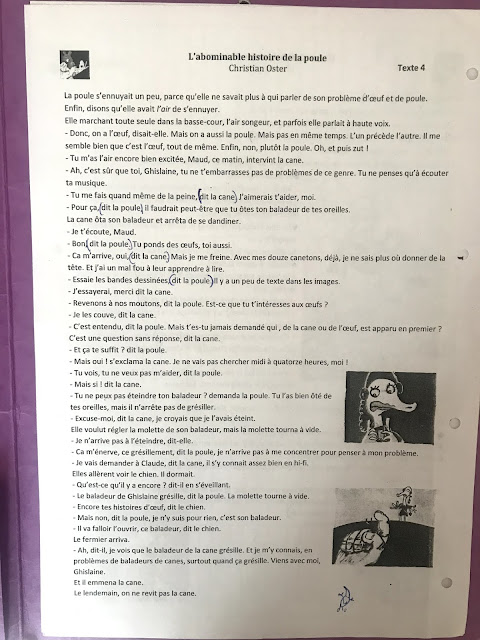 An example of a play that Landon has been working on. It reminded me of his time with Mme.Karen in kindergarten with La Poule Maboule! 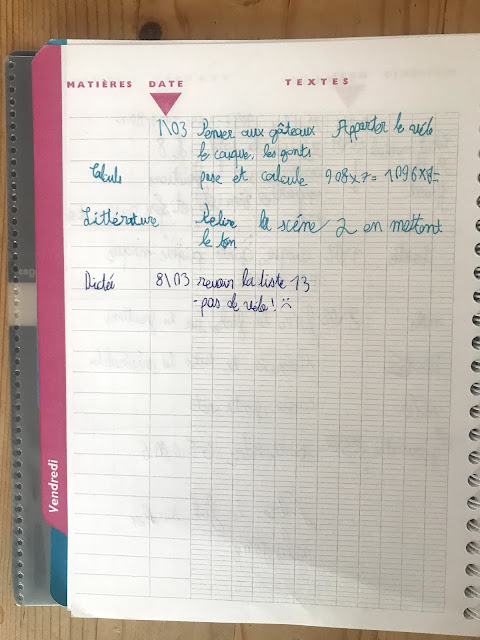 Handwriting in his agenda... 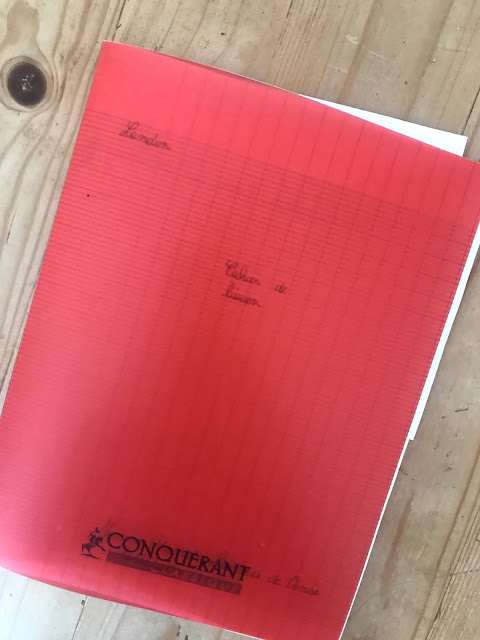 What the front of one of the books look like.

Oh.. and have you ever seen photos of European children using big square back packs? Now I know why... it's because they bring so much homework home! Our boys' books aren't looking super new anymore due to the smaller/sporty bags they have. Hudson has a huge binder that he needs to pack back and forth and it has definitely seen better days. If we were staying for a year I would probably have bought a new one that fits big rectangular objects.. but we aren't.. so I'm not :-p 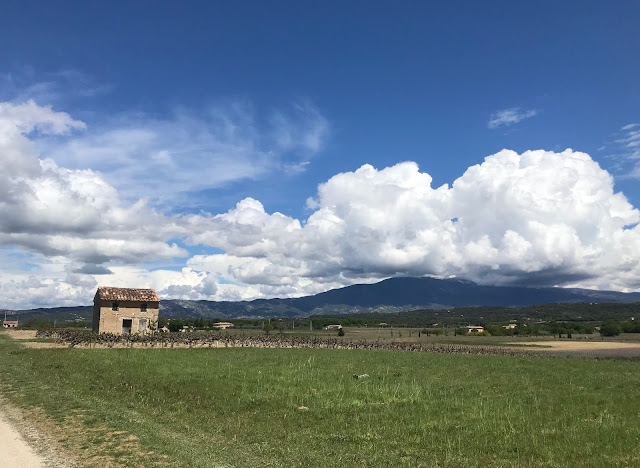 I was too busy loving all things French to blog... 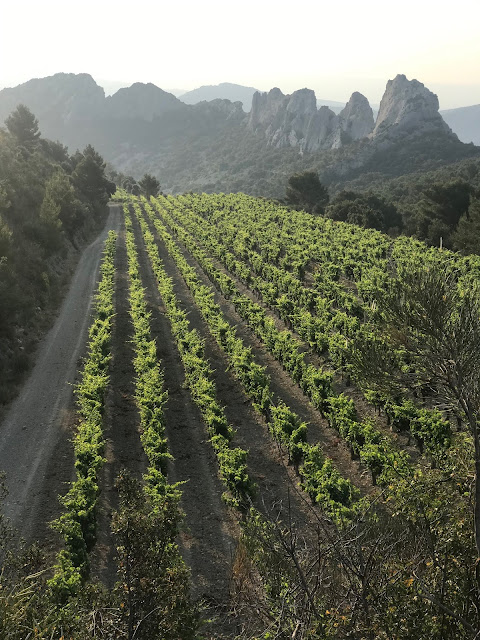 It's been a while. I was busy. Life was wild. I was having way too much fun. France was amazing, end of story. Maybe I decided to stop blogging because if I blogged then it felt like time was passing, and I didn't want any time to pass. I wanted to stop time and soak up every last scent of thyme in the mountains, every view of the Dentelles, every crumble of my favorite tartilette framboise, every second of every bike ride, every awkward and special conversation in French, every bisous, every fun family moment, every moment that I was given to focus on myself and not think about my job, the house, or shuttling around children to activities. I can't write this without crying. I miss you so very much Beaumes-de-Venise.  Sitting here in Croatia on holidays it is hard to imagine not returning to your beautiful village filled with amazing people in a few days like after the other vacations. You have such a special place in my heart. I think I have decided to write a series
Read more 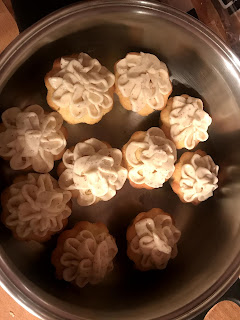 This past week has been filled with baking and biking! Last Friday it was the responsibility of H's class to do some baking and drop it off at the salle des professeurs (teachers room) at the start of the day. The baking was to be sold at the end of the day by whichever parents were available, just outside of the school gates. All proceeds went towards the school. Each week there is a different class responsible. Anywho... I ended up making some vanilla cupcakes with brown butter frosting. They were pretty tasty after I fiddled with the replacement ingredients a bit! I have yet to find baking powder or baking soda and instead have replaced it with a rising agent. Things taste a bit different but that's ok :) I ended up making a different recipe for Sunday when I dropped off some cupcakes to sell at the Vide Grenier (attic sale/garage sale) with proceeds going towards the school. Of course the internet has a zillion options for baking and what to bake when in France but a ne
Read more